Little sweetheart, I was looking for something to watch on Netflix tonight and I came across a movie I remember seeing once in the cinema but I don’t think since. It’s kind of remarkable.

It’s called “The American President” and it’s a feature film written by Aaron Sorkin before he’d created The West Wing. Indeed, it was sometime after this film that he was asked in a meeting with NBC if he had an idea for a series and, just kind of bluffing off the top of his head, he pitched West Wing, describing it as focusing on the White House staff - like the movie, he told them, but with the secondary cast brought forward. He didn’t actually have a script or anything like it. He had to go off and write the pilot immediately but, obviously, it worked.

Anyway, back to this movie, you can really see so much of the West Wing in it - the “walk and talks”, the iterations of the characters we’ll later see - Chief of Staff, Press Secretary, Communications Director. And the cast itself - Martin Sheen instead of President is his Leo (the best friend and chief advisor), Anna Deavere Smith instead of being NSA Director is CJ (the hyper-articulate female Press Secretary), and a whole lot of other future West Wingers, Ron Canada and Joshua Malina (Will Bailey) for instance, turn up in the film, too.

I was only 8 minutes in when I called your mom to say she had to see it.

You brought the series to me, little sweetheart. Your mom told me how proud you were to have done so. And it’s been something special for me to share with you and your folks.

This was such a nice surprise tonight, little sweetheart. I could feel near you me.

Posted by Michael Louis Serafin-Wells at 7:56 PM No comments:

Little sweetheart, today is the Inauguration.

I can’t tell you how relieved everyone is here. Sylvia texted from France even before I was awake and I’ve been texting with your folks since I’ve been up shortly thereafter. We’re all watching the ceremonies, the “virtual parade”, the signing of executive orders, the swearing in of staff, the evening’s concert, as the page finally turns on these awful four years.

We’ve so much work to do, little sweetheart, and the pandemic is really perhaps at its most deadly just now. But vaccination has begun (including your dad!) and even as we brace ourselves, still hunkered down in early winter, we can feel some glimmer of hope.

I’ll be saying quiet prayers in just an hour or two as I lay down at the end of the night. Please be near me, won’t you?

Posted by Michael Louis Serafin-Wells at 7:53 PM No comments:

Little sweetheart, 30 years ago today, my father died. It was so shocking at the time. I couldn’t know, then, how far more unfathomable life and loss would be.

I talked to you about that day, little sweetheart. You’d lost your dear brother Jesse just the year before you and I met and although my dad’s passing was sudden and untimely, Jesse twenty years younger when he passed than my dad had been. Both far too young. I like to think that you and Jesse have gotten to know my dad a little and that you get together now and then, looking in on us here and encouraging us on.

This week is always a strange one for me, little sweetheart - I remember how you would always so vigilantly check up on me as the day approached - and the passing of my dad is book-ended by the death of my friend Curt, who died in 2007 (again, less than a year before we met) on the 19th.

I’m feeling on edge, little sweetheart, but saying quiet prayers. Please be near me. With all my love forever.

Posted by Michael Louis Serafin-Wells at 7:51 AM No comments:

Little sweetheart, I heard from your mom today and I have good news - your dad, being a frontline worker, an MD, has gotten the second of his two Covid vaccines.

He’s the first person we know to have done so and we’re all incredibly relieved because he has been so committed, as always, to caring for the sick and we’ve been terribly worried about his constant exposure. Hopefully, your mom will get hers next, soon. Fingers crossed!

Posted by Michael Louis Serafin-Wells at 7:26 PM No comments:

Little sweetheart, yesterday we were back on the great Irene Trudel’s show on WFMU.

Irene was one of our earliest champions, the first DJ to play tracks from “Of Love and Lost” and then really taking up the banner with BPXmas and Angels, onward.

Today was her Best of 2020 show. She played “A Place” - the lead off track from disc two of Deux Anges and had lovely things to say about it after. Irene’s including the album in her Best Of makes this the fourth year end list Deux Anges has made. Sylvia designed this little graphic with the info. 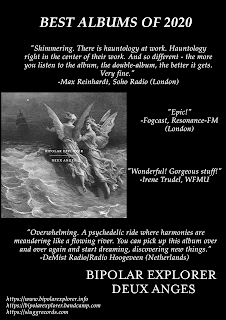 Posted by Michael Louis Serafin-Wells at 1:17 PM No comments:

Little sweetheart, remember I told you how we suddenly piqued the interest of Max Reinhardt - the former host of BBC 3’s Late Junction, who’s now over on London’s Soho Radio? He played “Infinity Hall” from the new album on his Best of 2020 show last month and then another track, “Snowfall” on Christmas Day.

Well, last night he sent me a message on Twitter asking if I could do a live phone interview with him on the air this morning about 8am our time. He wanted to talk both about music and to have someone on from the US to talk about the rather shocking attack on the Capitol two days ago.

So, I set an alarm - that’s early for you & me, right, little sweetheart?! - and was on my second cup of coffee by the time he called. I think the on air stuff went fine. Sylvia said it was like hearing me on MSNBC - ha!

But I think my favorite part was all the off air stuff. Between segments, as Max was playing tracks (he asked for two musical suggestions of other artists - I picked Swartz et’s “Nighttide” and a really great Iranian ambient artist named Siavash Amini - we chatted. I got to tell him how much we’ve loved his shows over the years and he said really nice things about our work, too. He’s actually living in Oxford where you went to school. He asked what track he should play of ours but I left it up to him.

He picked “Flag Day (Summer Dream Version)” from Sometimes in Dreams and I said that was a great idea since you are featured so prominently, little sweetheart! And that’s how the show ended - with your soaring vocals.

Posted by Michael Louis Serafin-Wells at 10:07 AM No comments:

This Christmastide has been so different than those of year’s past, little sweetheart. I’ve been on my own. Usually, I’m just getting back from California after seeing your folks this time of year.

It’s been difficult and sad and I hadn’t even been over to the little rectory at Sacred Heart to bring Christmas cookies to Sister Catherine and rest of The Order. Not that I didn’t want to, but because of the whole pandemic thing I thought it might not be a good idea to bring something I baked - I didn’t want them to worry. But I also usually bring them a copy of a new album after we release it and I hadn’t done that yet.

So I walked over with a Christmas card and a copy of Deux Anges and rang the bell. Sister Catherine wasn’t there but two of the other sisters talked to me for a while. I gave them the little package and told them about you. They said they’d give the package to Sister Catherine and before I left we stood in the doorway and we said a little prayer.

Please be with me today, little sweetheart. I’m missing you so very much. With all my love forever.

Posted by Michael Louis Serafin-Wells at 12:03 PM No comments: